This is a rundown of what has been rocked and changed in the evermore demanding and encrouching politics during that past two decades. One can see that it has fundamentally eliminated the old left and replaced it with a more corporately aligned and ideologically divisive and radical. I’ll lay this out in the core political stances, which have been the old agreements, old compromises.

1. Free Speech: Anyone can see that the principally clear free speech stance has largely been replaced with lefty-feminist defined “hate speech” and non-mainstream “misinfo” exemptions. Free speech means that everyone gets to speak and reach is defined by who wants to listen. This has been replaced with the view that some media and people need to be silenced in order to give others more room. Further, moderation needs to be in place to give the advantage to the “right opinions and facts”. This has been pushed through mainstream media, entertainment, Silicon Valley (pre-Elon Musk?), and the woke institutions.

Btw, teaching young children whatever one wants (neo-marxism and adjacent insanity) is not a free speech right.

2. War: The left is strangely silent on wars nowadays, except the war in Ukraine. This change happened especially during Obama’s presidency. So, here they have aligned with big military (contractors). Now they’re completely on board with NATO expansion as well.

3. Abortion: During Clinton’s term and after the compromise on abortion was “safe, legal and rare”. The left has largely skipped the rare part.

4. Privacy/Surveillance: On this one the left has been better, but the mainstream has been extremely bad on this fundamental right. So, here we’ve been all too willing to outsource this important power to big tech/big data/big intelligence.

5. Equality: There used to be a universal equality element that is now largely replaced with an intersectional feminist view on sex, race. There’s evermore talk of “equity” instead of equality. Through this switch in philosophy surrounding equality the new left has thrown much of the working class in the West under the bus for “revolution”.

6. Bodily autonomy/health freedom: The new “corporate- and state power” left really came out during the covid event. A big thumbs up to big pharma and big state.

7. Carbon control (for West): There used to be a dream to industrialize and lift up the whole world within the left. There also used to be an “alternative” or “fringe” science acceptance within the left. This has taken a lot of hits in the “carbon & climate” one sided reporting and later during the covid event. There has been a strong push to adhere religiously to establishment-chosen science over rigorous scientific debate and process, as well as an unprecedented reverence for big pharma. The demand for carbon monitoring and -control has also been mostly tied to the West.

8. Mass-Immigration: There used to be an understanding within the left that mass-immigration of unskilled, third world people is one form of class warfare used to lower wages and worker demands in West. It can also over-burden the health- and social systems and lessen safety.

9. Necessity of police: As many on the old left were against the drug war, militarization of police, increase in surveillance, etc. they sought to reform the relationship between police and citizen. The new left is often outright against police – “ACAB”, “Defund the police”.

So, I’d say it’s fair to say “It’s not me, it’s you”. One can see an obvious consolidation of state- and corporate power within the new left’s views, but it has also effected society at large. None of these points contradict the World Economic Forum in Davos, or what the CCP might wish for the free West. Every one of these points are a betrayal against the promise of America and the free world. 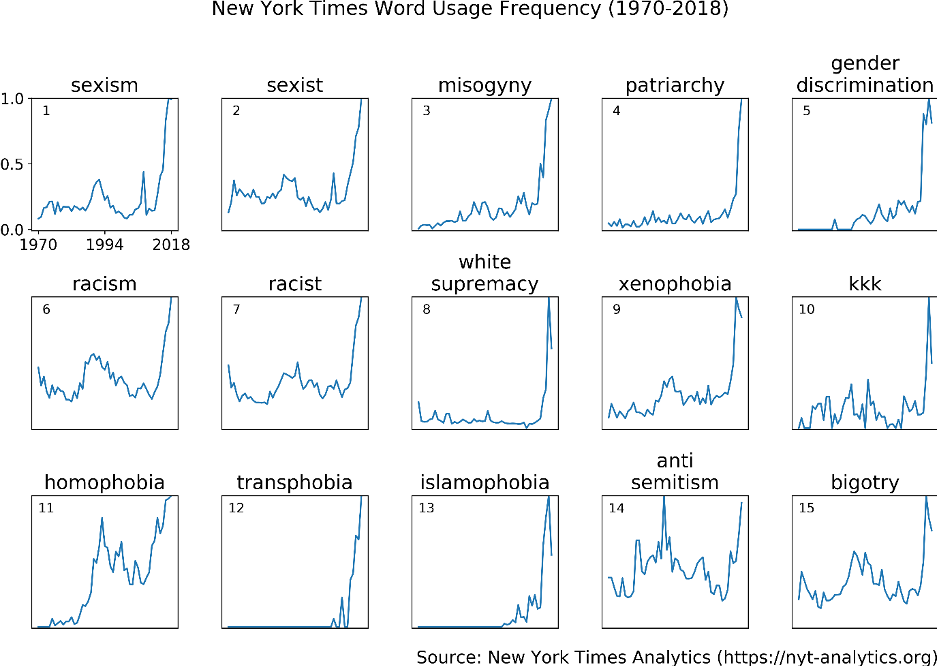 To illustrate that this is a planned and coordinated attack I’ll show you the New York Times woke/intersectional feminist word usage. This words show a massive increase post 2011 and Occupy Wall Street. Brexit, Trump and covid certainly galvanized the main-stream mass and put this neo-Marxist push into further gears .