‘7’ represents the deeper essence of humans regardless of sex/gender, sexuality or skin color. It is based on the 7th period in the Genesis account and humans learning to distinguish between light and darkness, good and evil. We appear on period six, described as follows:

and then our base drives are described as follows:

“God blessed them and said to them, “Be fruitful and increase in number; fill the earth and subdue it. Rule over the fish in the sea and the birds in the sky and over every living creature that moves on the ground.”

The first part I see as procreation, but also family, home, community, etc. The second part, starting with “subdue it.”, is our drive to learn, understand, work with/use nature and animals. It’s basically our drive for science and technology. Netiher of these human base drives are prescribed to a certain sex in this text.

Problems stem from people in power having a very restrictive view of what constitutes family/community and then seeking to “subdue” everyone else.

“that until the philosophy which holds one race superior and another inferior is finally and permanently discredited and abandoned;
that until there are no longer first class and second class citizens of any nation;
that until the color of a man’s skin is of no more significance than the color of his eyes;
that until the basic human rights are equally guaranteed to all without regard to race;
that until that day, the dream of lasting peace and world citizenship and the rule of international morality will remain but a fleeting illusion, to be pursued but never attained.”

Looking beyond rigid stereotypes is natural following Universal Individual Liberty. It ought to be a no-brainer, but here we are again with “scientific” consensus and prevalent normalized culture claiming people should be judged primarily based on sex/gender, skin color, sexuality, etc. and that especially one skin color and one sex is evil. The toxicity of this fallen world doesn’t run along these lines nor does the remedy.

This is the real story – the West, in particular, is in a second big wave of cultural war stemming from academia into media, entertainment, politics, education and corporations. The first wave had a race-based pseudoscience with whites above all kinds of ”people of color” (not white) and the ”evil” Jews on top. In this wave, the ”evil” on top are white people.

The first wave was fairly traditional concerning sex roles, but not necessarily more oppressive towards women than men. This wave has its roots in the fight for “FEMInism” (for women) against “PATRIarchy” (Boys, men, and masculinity). There we have a clear neo-Marxist victim demographic-oppressor demographic dividing of the people.

Its original Marxist ”class divide” of women against men has since evolved to become intersectional feminism. Originally, Marxism was the workers against the upper class. Now it’s all kinds of demographics pitted against each other in a supposed hierarchy of human worth based on fairly untelling traits – skin color, sex, normalcy concerning gender identity, sexuality, ability; thrown into that mix are religious, philosophical, political, economic and scientific issues as verboten and haram to think about. The main tactic is to weaponize our good intentions of disagreeing with racism, sexism, etc. to destroy and de-person critics of this actually sexist, racist and totalitarian tyrannical movement. 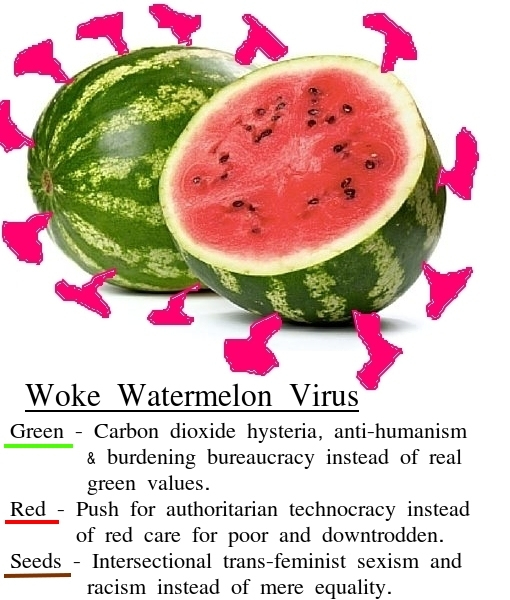 I liken it with a poison watermelon. It’s coated with dark-triad traits (psychopathy, narcissism, machiavellianism), with which it attacks and attaches itself. The green exterior consists of actual green issues being subverted with the carbon dioxide alarmist Agenda 21 policy. Below this “green” agenda is a reddish “utopian” agenda – one of forced collectivist society and centrally planned economy under the guise of being for the poor and downtrodden. This red agenda in a green shell pushes poisoned seeds of intersectional Marxist feminist identity politics; seeing everything as a fight for power between basic demographics and the new correct hierarchy being the straight, white, Christian male at the bottom and above that all other traits as more honorable, respectable and deserving of empathy. Only these are justified to have power or a voice as only they possess valuable truth and opinions, but only if they parrot neo-Marxist talking points. This view of things has been harnessed for mass-immigration, especially from Islamic countries, to the West for various agendas.

One motive is obviously the demands of the usury money system, the mammon masters, to import people as the own population’s procreation has been squashed. Another agenda is a communist wish to destroy western liberal democracies, and then there’s a more moderate leftist wish to import new voters. This new intersectional Marxist feminism, that took root in academia in the 60s and 70s, is now prevalent in most media, politics, education, etc. It seeks to control everything people do, say and even think, as well as destroy all enemies, all while playing victims (cry-bullying). Their diagnosis is wrong and their medicine is poison. There is a better way, one that actually shines a light on the real solutions.

Politicized social sciences of today generally deny evolutionary science. I’d say the truest core information when it comes to understanding gender relations and historical- and social analysis is evolutionary psychology. When it comes to race and IQ, I believe too much single emphasis has been put on IQ and value. IQ is the measure of some sort of tool/talent that can be used for various purposes depending on other traits. Without love for truth, courage and perseverance to go it outside the herd mind it can be an effective tool for (self-)deceit and rationalization, for making up intricate and complex illusions.

I see no problem with scientifically exploring the diversity of humanity as long as the rights and duties are equal. This ‘woke’ ideology has to deny all general differences as many adherents believe that any differences mean categorization which automatically means inequality. This is, of course, untrue and extremely intolerant.

The right perspective is that of the individual, what we all share and what we’re mainly responsible for; secondly, a lot of good and bad that can be said of all demographics even though we tend to slip into more black and white thinking. One can tell next to nothing about a person based on these traits.

The main thing that’s a meaningful measure of privilege in this system is money and even that says nothing about how an individual relates, suffers, contributes, etc. It only says that that person has a real right to do, own, access and traverse at a certain level in this world system. Other clear privileges include beauty, especially for women, and height, especially for men. Female privileges*, compared to male privileges, are not talked about enough. That’s because of the neo-Marxist “class” war pushed by academedia. It also needs to be pointed out that there are up- AND downsides to ALL traits and identities.

To understand the true basis of traditional sex roles and bio-psycho-social sex differences is fairly easy. To undo a long time of feminist indoctrination might be more difficult, but here goes. We evolved as women, who get pregnant and give birth, and men, who are freed up to provide and defend. Eons of this optimal division of labor and responsibilities have formed men more one way and women more another way.

This explains why men are generally physically stronger, why men have a more harsh humor, why men aren’t as opposed to “spreading the seed” and many other things. To claim all differences are due to oppression is wrong to the point of being retarded.

Haile Selassie I at the disgraced League of Nations in defense of his nation’s sovereignty in the face of the fad of that time – white supremacist, pseudo-scientific, politically extremist race ideology. We’ve come full-circle.

Haile Selassie I on the question of domination of one race over another, but also creed, national origin, etc. 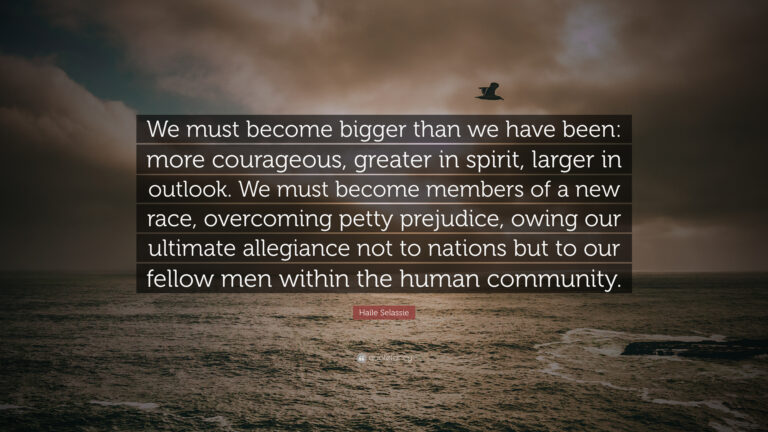 Bob Marley’s “War”, based on Haile Selassie’s speech at the UN in 1963. Notice that oppressive regimes are characterized as “unhappy”.