Projection, as a psychological phenomena, might be the most important to recognize in the world today. It is the phenomena behind which scientific racism, the tyrannical threat, hate and violence, etc. is hidden today.

Something’s screeching on it’s last verse when “anti-racism” is the text book definition of racism, trying to overturn the race neutrality of MLK and Haile Selassie I. When “equality between the sexes” is pure hate ideology built on extremely dodgy grounds.

I’ll give you a few examples.

– “Toxic masculinity” is supposedly the greatest ill of all times, but looking around it seems “toxic femininity” has been harnessed to maximize damage in the West. Among these are ‘cry-bullying’ ie. abusing victim privilege, total disregard for the only neutral ground – factual truth and universal rights – and the use of mass- and social media for character assassination. These tricks have been put in motion by the Frankfurt school and the french post-modernists.

– There is supposedly a “war on women” going on in the West. I claim it’s obviously been overwhelmingly a war on men and boys during the past decades.

– There’s this notion in feminist circles that men control and manipulate women in everything they do, even their gaze. I claim it’s overwhelmingly (feminist) women who partake in organized mass-nagging about how men walk, talk, think, feel, sit, stand, joke, laugh, fart, piss, write, etc. etc. Can you even imagine men behaving like that towards women. There would be outrage, as there should be.

– The radical feminists (mostly women) assume men have high in-group preference and given power discriminate against women. This study shows that the opposite is true. In short, it shows that everything else being equal, men tend to favor women 3 times out of 4, and women favor women 4 times out of 4. So, we should take these feminists at their word – given power they will discriminate against men and boys at every turn.

… which is tied to violent, misogynistic, even rape fantasy. Feminists claim men are the ones walking around with these fantasies and inclinations, but it seems to be mostly women and some crazy men, and when those men get caught for raping and killing there often seems to be huge numbers of female fans. Men in general can’t really effect this dynamic between some men and their victims and fans.

… which is closely tied to emotional support for mass-immigration from the middle-East. There is something strongly psychosexual, with a touch of skewed mother instincts. The bearded immigrants are “children” and people pointing out problems are a threat to the “children”.

– There are plenty of examples of this projection, but, in short, the oligarchy has tried to harness this feminist force, and added onto it skewed race ideology, skewed environmental ideology, etc. to try to push through a dystopian techno-tyranny.

– And how about the “unrealistic standards” claim? Truth is, after the “sexual revolution” and extreme commercialization and objectification, only about 10-20% of men are “good enough” for most women. Trust me, this result is programmed and manipulated on purpose. One can see it as a capitalist trick, to get men to run after money, cars and bling to get the women, but also a communist scam to break up the family and human relations. When all comes around tyranny is tyranny no matter what label it goes under, and the tricks to gain power are all the same.

In general, I think it’s pivotal that we break the barriers that have us discussing demographics as purely good or bad. Like feminists define the problem as patriarchy and the solution as feminism. Or as so called anti-racists define the problem as ‘whiteness’, which, on closer inspection, just seems to be basic values for a good life and a good community. And as for white people being “fragile”. C’mon man, there is no ethnicity that comes even close to having to take as much racial offense as white people. That’s been reality for decades.

Discussing anything bad in Jewish history has also been made highly taboo, which greatly skews perception and culture. Even criticizing the math of usury money or the pure propaganda of the old media has, to a large degree, been thwarted with accusations of anti-semitism. And as I understand it there are many of Jewish heritage involved in demonizing white people and the West in general while Jewish over-representation in the trans-Atlantic slave trade and communist tyranny are hardly discussed. The discussion of slavery must be broadened to include African tradition and involvement, the Muslim slave-trade, etc. Also, communist tyranny is hardly discussed compared to fascism, for that matter.

There’s also a strange blindness to the massive over-representation of Jewish people in movies, entertainment, media, banking and the upper-echelon of society in general. I believe a lot of the over-representation can be attributed to meritocracy, and perhaps, to some degree, a wall of ‘criticism immunity’ for the power elites.

Consider the constant talk of ‘white privilege’. What has been done with ‘white privilege’ is the confusing of majority with privilege, and especially majority in the countries that experienced the industrial revolution and all that followed. If one wants to know what groups/demographics are most successful or over-represented one obviously has to look at percentage of that group. For example, as around 13 % of Americans are black and 13 % share of Oscar nominations might be expected. A number above that would be over-representation, and there isn’t necessarily something wrong with that either. So, perhaps #OscarsSoWhite, but you’d expect more white faces is most areas and fields in a white majority country. The Jewish population makes up around 2.4 % of the US population.

This Princeton/Yale study about how white liberals and white conservatives talk to black Americans perfectly shows the projection.

These are just some basic imbalances that a larger acknowledgement of truth will balance out.

As this talk and supposed science saying white people are inherently racist and men are sexist is everywhere these days, where are the actual studies on which ethnicities are most racist and which sex is more sexist, generally.

… which is completely detached from reality. As we can see in this chart, the bombing of the middle-East and subsequent mass-immigration is driving anti-semitism in Europe.

And if you’ve read “A” on this site you might be familiar with the “7th day theory”, as shown to here on the right. It basically says that humanity will play out the light and dark of days/yowm one and four to begin with.

That means a stage of light/innocence/knowing, followed by darkness/violence/split, followed by a flood cataclysm, followed by what we call “recorded history”. During this recorded history there will be many light beings on the world stage, and also one sun and one moon. If we look at the world stage today, the two biggest person centric religions are Christianity and Islam. Many have pointed out the solar astrotheology in Christianity and the crescent moon is obviously the sign on Islam.

Now, as we know the moon doesn’t emit any light of it’s own, but rather it reflects sunlight. I claim this is apparent in Muhammed as projection in the following way – what he claims about himself we should take as testimony about Jesus. 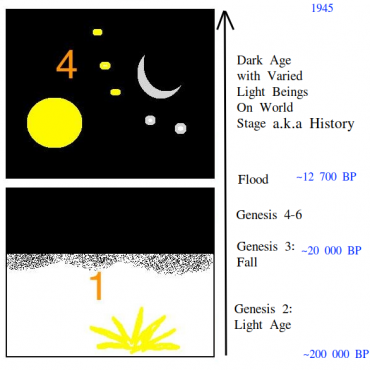