As there is a chance I gave the fetal heartbeat bills a boost back in the day, I’d like to make a little comment on the issue. Some time around 2003-2005 I wrote an esse on abortion and pointed out that the detection of a heart beat is a reasonable and well-founded place to draw the line. I sent to the text to approximately 100 (mostly college-) newspapers in the US and surrounding nations. About a decade later the heartbeat bills started popping up.

A few years later democrats pushed through laws that practically meant easy access to legal abortion up til birth. Many tend to liken the fetus with a parasite. I’d say it’s almost always and INVITED innocent. That being said, the process from conception to birth is one where the act of aborting becomes ever more severe. There are also subtle but strong psycho-social ramifications of normalizing abortion as a trivial issue. There is no hiding from reality.

I just happened to find the writing a couple of days ago, or at least some draft of it. Here it is. I stand for just about everything I wrote back then. Some things might need some clarification. Some might say it’s not constitutional, but anyone who knows anything about the subject knows Roe vs Wade is in no way founded on the constitution. If I remember correctly the reasoning landed on the privacy of the pregnant person (in modern jargon), which is an absurd justification when it comes to ending human life. Btw, this makes it a perfect issue to bring up in the face of the push for injection mandates and verification.

I’d also like to debunk the absurd claim that if men got pregnant there’d be free abortions on demand. A man is almost always directly involved in pregnancy and is legally obligated to provide for the child if the woman so chooses. That is how we relate to men’s part in the pregnancy – all responsibility and no rights. Barely a right to talk about the issue. Women’s choices range from birth control, morning-after-pills, abortion to adoption. So, women have all these choices. All I’m saying is, if one fails to use all the choices available concerning one’s body and sexual behavior wisely, the choice to end another life must be fairly restricted along with a plan to get to a good place. We need to stop lying about abortion as a trivial matter and introduce reasonable responsibility.

I’m for safe, legal, rare and early, but the main focus needs to be on education, culture, personal responsibility, support, a good and fair adoption system, GUBI (also as child-GUBI), new and better contraceptives and so on and so forth. If one practices unsafe sex testing for pregnancy every other week ought to suffice within this sort of system. This might give a couple of weeks of time to decide, if the limit for abortion-pills is 6 weeks. This should obviously be first and foremost in informing about life within these rules, alongside with resources for all options.

I’ll get back to that later with some more comments. Enjoy. 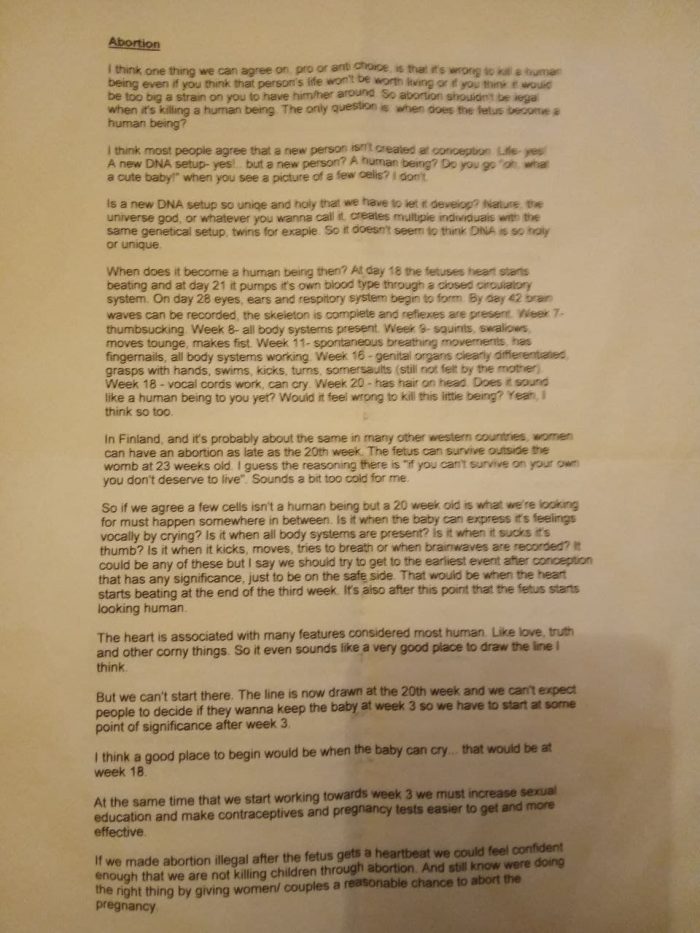 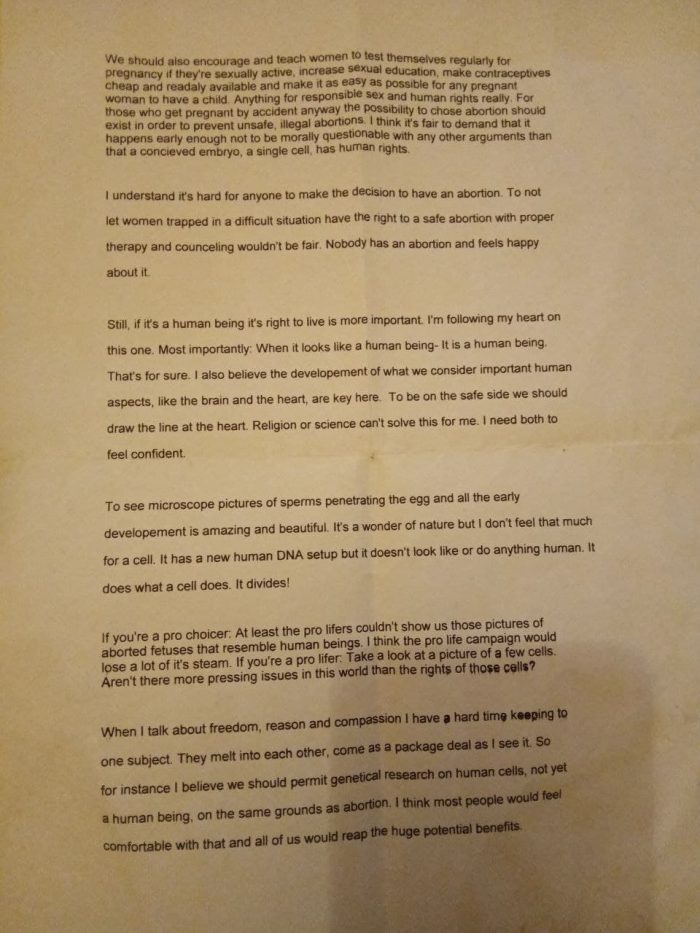